An input block can receive redstone signal from the block above it or from any block on its sides. An output block sends its signal to any compatible device that’s attached to its sides or to its top. Possible output devices are levers, redstone torches, powered rails, doors, trap doors, and note blocks. When the output block doesn’t have any attached devices it will directly send signal to any input pin whose block is touching the output block. 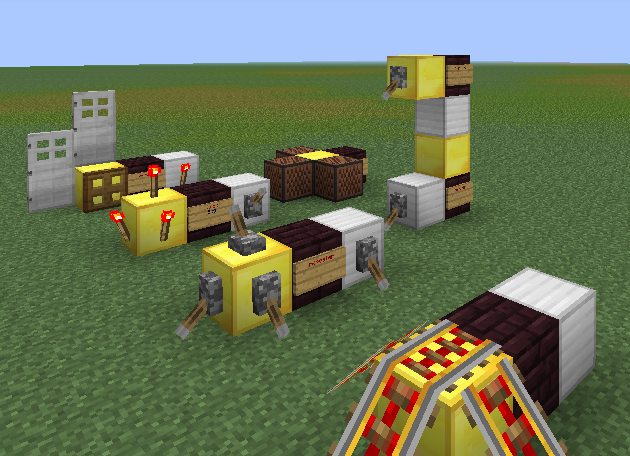 The order of the input and output blocks is very important as different pin numbers have different functions. In simple circuit structures the pin numbering starts at the chip sign onwards. The pin to the right of the sign will always come before the pin to the left. See Chip detection scanning rules below, for information on finding the order of pins in more complex structures.

A clock, counter and two synth chips connected directly to each other forming a more complex structure. 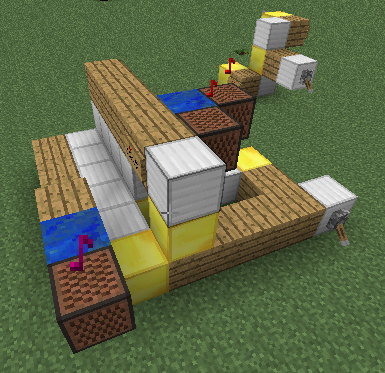 When all you need is a chip with one i/o block, a sign can be directly attached to the single i/o block without needing any extra chip blocks. 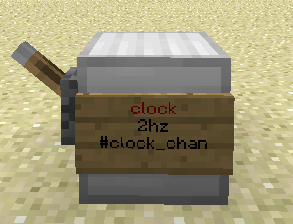 There are several commands for investigating problems.

You can destroy a chip by breaking any of its structure blocks, or by running the /rcbreak command while pointing at a circuit block. Use /rcdestroy to destroy the chip and remove all of its blocks. Creepers, TNT explosions and fire (in case you’re using flammable blocks) will also cause the chip to stop functioning. Destroying a chip block with Power tools or worldedit commands, however, will not cause the chip to decativate until the server shutdowns, and can result in “phantom” circuits still taking place in memory. Whenever the plugin saves data invalid chips should be deactivated. Running /rcsave to force saving.

One very important thing to note is that the recursive scanning process work by branches. It will continue going from block to block in one direction even when chip blocks are found in other directions. Only when it reaches a dead end it will go back to try the other branches.

To change any of the preferences while playing, you can use the /rcprefs command. All values are stored in <craftbukkit folder>/plugins/RedstoneChips/preferences.yml.

Block types - these can be any material name or id.

Message colors - these can be any chat color name.

/rchelp <command name> displays all permission node that are associated with a command.

All chips have create and destroy permissions. These also have an “allow” and “deny”, which function identically as above. Destruction protection prevents a chip from being destroyed via RC commands or by breaking the blocks that make up the circuit. The following node types can be used:

Protecting channels allow users to control who can create and destroy wireless chips on particular channels. This system is independent of the other permissions and functions even when permissions are disabled. Users can define admins for the channel, who can change who has access to the channel, and users, who can create chips using the channel, but can not change access. /rcchannels does not show a user any channels that they do not have access to, and protected channels the user does have access to are shown with a “P” to identify they are protected. /rcchannels <channel name> will show all authorized users and admins of the channel. Use the command /rcprotect to manage protected channels.

Chip libraries are essentially bukkit plugins that provide RedstoneChips with new chip types. If you have a solid understanding of Java, writing your own chips should be easy enough.

These should help you get started:

Don’t hesitate to ask any question by mail or on the forum.